My last buddy read with the wonderful Janine went so well, we figured it was time to do another one (the first was of Hunter Shea’s Ghost Mine)! I was seeing some very flattering reviews of Ross Jeffery’s new book Tome, so when Janine asked if I wanted to do that it was an immediate yes from me. Ross was kind enough to send me a digital copy, and now we present to you our joint reviews below!

By the way, if you’re not familiar with Janine and her work then you’re sorely missing out! She’s a boon to the horror book community and a seriously cool person. Not only does she write great reviews and interview lots of great authors on her website (https://janinesghoststories.wordpress.com/), but she also has an active social media presence on Instagram and Twitter and if you join her Patreon then she’ll kill you in an original short story. Woah! Oh and she also co-hosts the podcast/YouTube channel Cryptids, Crypts, and Coffee.

Now, on to the reviews! I’ll lead with Janine and then follow up with my own.

SUMMARY: Juniper Correctional, jokingly abbreviated to JC, a dark jewel in the crown of the godawful American prison system, where the very worst of Juniper rot for life-sentences that seem to stretch forever. In this hell-on-earth, it’s hard to tell most days who is worse: the inmates or the corrupt guards that enact the will of the monomaniacal Chief Warden Fleming. Fleming is a fallen star, a once bright-minded leader who turned the prison around, now hiding a terrible secret eating him away from the inside, a secret he’ll do anything to cover up. But Fleming has problems, problems that threaten to unveil his secret. There is killer among those housed at Juniper Correctional. Inmates keep turning up dead, murdered in ungodly ways, but nobody knows how or why. The only thing that connects them is a nameless book from the prison’s library.

In a nutshell and spoiler free, TOME is a character driven book set in Juniper Correctional Facility. We are introduced to a plethora of characters (much like King) but Ross cleverly uses different POV’s without head-hopping so you are unlikely to get confused. We get to meet both guards, prisoners, Federal Agents and a few other people linked to our main people. I have been informed that there are mentions and cross-overs to characters and locations in JUNIPER, since this is all part of the same literary universe. However, again like a King book, there may be extra bits you get if you have read JUNIPER, but there won’t be anything that leaves you scratching your head. They are both designed to be both standalone and part of a series.

There are some utterly vile characters in this book. And I mean total scum of the earth. Again, I have gathered that this is the tone of the town in general, a bunch of racist shit-bags with the morals of a street rat. But that is just another nod to how well these abhorrent specimens are written. You can’t loathe a boring two-dimensional character. But you can absolutely detest the vivid lowlife’s in this easily. There is a hell of a lot of racism in this book. BUT, it is imperative to the story and has been used to reflect the attitude of this disgraceful town. I would think that Ross spent a lot of time making it was presented in such a way that made you angry with the characters, not at him in anyway.

Ross, like me, is a Brit using an American voice. But I would suggest it would be hard to tell that. It read like an American had written it to me. I’m not an expert, but the language and dialect of some of the dialogue seemed pretty much spot on. I will be interested to see what Ben made of it, being from the south …

So what were my favourite things about this particular story? Well something that I loved, was the little nods to the horror community. Both Joshua and Gemma Amor, another fellow West Country author, got a shout-out and there were a few little nuggets like that. Those meta references always make me smile, an if a normie was to read it, you never know, they might just go and google their name and hence, a new fan is born.

I also really liked the fact that Ross wasn’t afraid to get right down to the nitty gritty with some of the gore. We had blood and viscera a plenty and I love that! Yes I know, horror doesn’t have to be in your face to fill you with dread but gimme some ghoulish gutting scenes and I’m in heaven – or hell haha.

Any complaints? Um, well I read this in just a few days – a very beautiful signed paperback I might add – so what does that say? I literally have zero complaints. There were characters I hated but you were supposed to. There was dialogue that made me angry, it was meant to. So no, I have no complaints. Maybe only that I didn’t read it sooner haha.

Sometimes when a book is really hyped up, much like a movie or a new song, you can feel let-down and disappointed when it’s your turn. Thank god this didn’t happen with TOME. It just made me want to read more, which is handy as JUNIPER has moved up the TBR list.

I’ll say this right off the bat: Tome is dark and brutal horror done right. I’ve had several conversations recently about the use of highly disturbing or taboo subjects in horror, and how poorly things can go when they’re not handled properly. Anything that values shock over substance is a hard pass from me. However, it is possible to weave traumatizing scenes involving rape, gore, rancid racism, and so on into a story, but those scenes certainly must exist for a reason beyond just triggering a reaction.

I want to be honest with you when I say that, for me, Tome was an emotionally heavy and distressing read. Not just because of the rape scenes and not just because of the abhorrent racism, but also because of how depressing it all is. It’s a dark and grimy story about dreadful people who do unspeakably awful things. There were several times I had to set the book aside for a bit to decompress after a specific chapter or event. And yet, I always returned eager to dive back in. The story, in spite of its ugliness, is also utterly compelling.

The book is set almost entirely in Juniper Correctional, a decaying prison full of despicable inmates and corrupt guards led by the truly atrocious Warden Fleming. A recent string of suicides inside the facility prompts a visit from two black U.S. Marshalls, who believe (correctly) that there is something more going on behind the scenes of JC. This is a place of dark secrets and there are those, both human and demonic, who will do anything to keep certain information covert. Like I said, this is a book full of terrible people. We expect the guards and ruinous spirits to be evil, but even the Marshall Dolores Fink has her own less-than-benevolent motivations. The only slim beacon of purity is Frank, a prison guard who lives his life right but will eventually have his light put to the test by the darkness.

Don’t get me wrong though, I loved this book! If this is sounding like a negative review it’s definitely not. The characters, though immensely flawed, are all fascinating and multifaceted. In fact, I think the reason they were so upsetting is because of how realistically they were written. The story line is full of twists and scenes I will never forget. Even though a certain twist I could see coming from a long way off, the revelation is still shocking. It felt like staring down an oncoming train, wanting to move but unable to look away.

The excellent writing in general is what really elevates this story for me. The descriptions and imagery are incredibly powerful and vivid. I could feel the damp, cold of the cells, sense the dreariness of the constant storms, see the festering rot in certain scenes, and smell every bit of cigarette smoke, perspiration, and whiskey on Warden Fleming. All of the details are graphic and disgusting, but that’s the nature of the story that author Ross Jeffery has written.

If you like the perverse mystery of Fincher’s Se7en (but with demons), the violent prison setting of Brawl in Cell Block 99, or the literary quality and bleak humanity of much of Cormac McCarthy’s writing, then you will absolutely enjoy this! I know this book is set in a series all based around the town of Juniper. And though Juniper is a place I desperately don’t want to visit, I will absolutely be checking out more books from this author!

Also, you can watch the video version of our buddy reviews below!

Many thanks once again to Ross for sending the book and to Janine for doing the buddy read. I hope you guys are enjoying them, because we’re already planning more for the near future!! 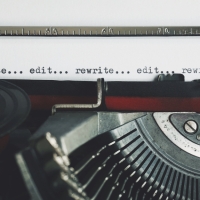