Book Review: Whisper Down the Lane

I was born after the Satanic Panic of the 80s, but growing up in the 90s-00s with super religious parents I feel like I still caught the tail end of it. It was nothing like the outright fear and terrifying public bandwagon action of what’s in this book, but while reading I did get flashbacks to misplaced apprehension from my own childhood.

SUMMARY: Richard doesn’t have a past. For him, there is only the present: a new marriage to Tamara, a first chance at fatherhood to her son Elijah, and a quiet but pleasant life as an art teacher at Elijah’s elementary school in Danvers, Virginia. Then the body of a rabbit, ritualistically murdered, appears on the school grounds with a birthday card for Richard tucked beneath it. Richard doesn’t have a birthday—but Sean does . . . Sean is a five-year-old boy who has just moved to Greenfield, Virginia, with his mother. Like most mothers of the 1980s, she’s worried about bills, childcare, putting food on the table . . . and an encroaching threat to American life that can take the face of anyone: a politician, a friendly neighbor, or even a teacher. When Sean’s school sends a letter to the parents revealing that Sean’s favorite teacher is under investigation, a white lie from Sean lights a fire that engulfs the entire nation—and Sean and his mother are left holding the match. Now, thirty years later, someone is here to remind Richard that they remember what Sean did. And though Sean doesn’t exist anymore, someone needs to pay the price for his lies.

The novel alternates between two timelines: the 80s with a young protagonist named Sean, and then thirty years later with an adult protagonist named Richard. Each storyline is compelling on its own, but when they start to overlap and the threads become more clear the book really hits another level of awesomeness. The first half is unsettling, but the pace really picks up in the second half and I white-knuckled it to the climatic ending.

Each character is also very well-constructed. I really felt for Sean’s predicament. It’s hard to believe something like what he did could happen (an innocent fib turning into a spiraling web of lies, ending with massive public outcry and a shocking suicide), but the book is based on a true story. I also really felt Richard’s increasing anxiety, as his world crumbles around him. I haven’t read many books that epitomize paranoia as well as this one.

There are elements of the supernatural here – and with Richard’s splintering reality it’s harder to tell as he becomes more of an unreliable narrator – but this story focuses more on the “panic” and less on the “satan” of Satanic Panic. It’s a fractured tale of dishonesty and terror, and it’s sure to please fans of horror, thrillers, and true crime!

Clay McLeod Chapman is the author of the novels Whisper Down the Lane, The Remaking, and miss corpus, short story collections nothing untoward, commencement and rest area, as well as The Tribe middlegrade series: Homeroom Headhunters, Camp Cannibal and Academic Assassins. Upcoming projects include Unknown, a psychological horror anthology television series co-created with director Craig William Macneill, produced by Jonathan Nolan and Lisa Joy at Kilter Films and Amazon Studios.

The Undying Legend of George A. Romero 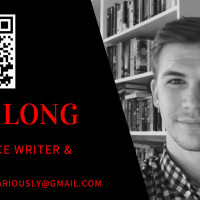